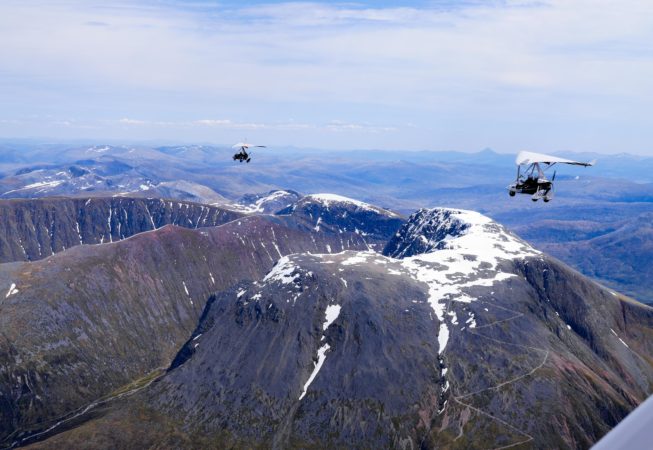 ‘For as long as I can remember I have always been fascinated with flying. it was my intention to fly in the military, but sadly the Taliban put an end to that. In the early days after injury I still needed a lot of revision work done on my legs which meant I was stuck in my wheelchair and unable to continue practising walking. I was frustrated and I had some of my most emotionally challenging days. When Aerobility offered to take me up in a plane, I jumped (ha!) at the chance and the feeling was indescribable. Racing across the skies I felt free, I didn’t feel like a man who had lost his legs, I was on a level playing field. Legs didn’t matter.’

Following Injury, Luke had assumed that flying would not be an option, that it was very difficult and  highly selective and only the brightest, fully able bodied people need apply. Then he discovered Aerobility, a charity which specialises in disabled flying, and his whole world opened up. As it turned out, the brightest disabled people could soar through the skies just as well. Luke was even more inspired by the forward thinking and very ‘can do’ attitude toward disabled pilots shown by the Civil Aviation Authority (CAA). Luke passed his commercial pilots medical with flying colours!

While learning to fly an adapted PA28 with Aerobility, Luke heard about a flying expedition to Antarctica with a group called Flying For Freedom (FFF). So in November 2011, Luke was one of the first injured personnel to climb into a microlight and became a founding member, and later a trustee of the charity Flying For Freedom. From initial tests and modifications made to the microlights to accommodate his prosthesis, to development of ‘flying’ legs with his prosthetist, Luke again pushed boundaries and paved way for others to do the same.

Of that first flight he said

‘On first sight, I didn’t like the look of it, in fact it looked suicidal to fly one! But I reluctantly got in to save face with the people who had invited me over. The moment we lined up on the runway, and I felt the buzz of taking off so low to the ground, I was hooked. The views were breathtaking and completely unobscured by the aircraft.’

He experienced such a huge sense of freedom and release from the limitations of his injuries when soaring the skies in the open cockpit of the aircraft and almost immediately became passionate about how this experience could also be life affirming, and life altering for others in his position. A year after his first flight Luke earned his pilots licence and was given free reign of the skies. Since then Luke has lead a circumnavigation expedition of the UK, supported less experienced pilots to plan and organise expeditions, and in his role as trustee, recruited many new wounded, injured or sick (WIS) personnel to join the scheme and take part in an expedition over France and many key battlefield sites of WW1.

Now, in 2022, still pushing boundaries, Luke has teamed up with ‘Wings for Warriors’ who have been supporting him to reach his ultimate goal: to be the world’s first double above knee amputee commercial pilot.